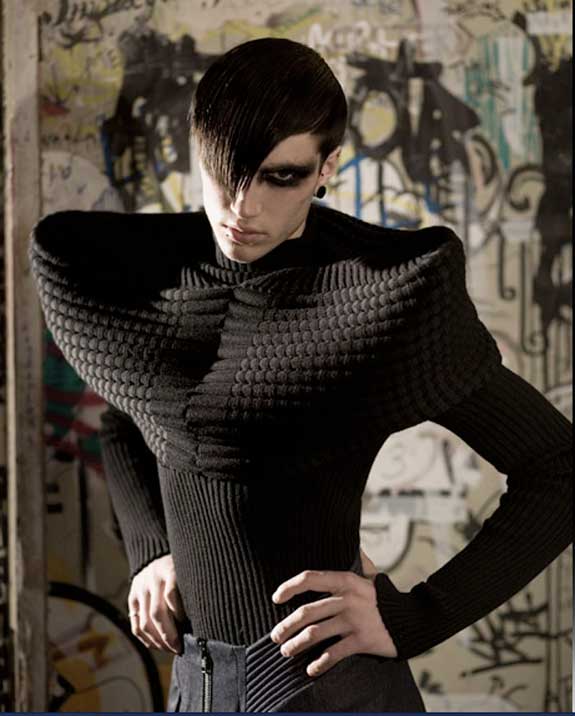 RCA graduate Kim Choong-Wilkins is creating a new sexual direction in Knitwear design. His outspoken views on knitwear should have us all thinking.

RP: Where did you study, and why did you choose to study there?

KC-W: My first degree was at Central Saint Martins in Textile Design where I graduated in 2005. I then worked for two years in the fashion industry, before completing my MA at the Royal College of Art in Menswear Knit in 2009. Whilst working, I realised that I was desperate to start my own fashion label and returned to education to take the time to develop the foundations on which I was to build my dream. I chose the RCA because of the incredible confidence and quality of the collections being produced there. I thought it was going to be a place where innovation, concept and creativity were really encouraged. In truth I found myself fighting to preserve these things in my work every inch of the way.

RP: What made you decide to work in knitwear? How do you think it’s different from other parts of fashion?

KC-W: In a funny way, knitting really chose me. The way in which I work as a designer is very physical. I need to manipulate my medium in reality and my approach is more sculptural and immediate than abstract. In this way I began to hand knit, my first creation, as with all beginners, was a scarf. I taught myself from a book one Christmas and just kept going, in the end I had a scarf that was 32'!

Since then my practice has become more defined, I am increasingly interested in demanding more from the knitted structures. Investigating techniques in which the fabric behaves in less conventionally. If I am brutally honest, much of my work is fuelled not by my great passion for knitwear, but by my great disappointment in it. I think that there is something breathtaking about turning a single yarn into an object with real physical qualities. To then see this ingenious technique used for such dross as is generally churned out by most fashion houses really makes me furious. I do what I do, because I find what I see out there in the industry, inexcusable, particularly in men's knitwear. Of course it's great to have a nice, unfussy, sweater that doesn't demand too much of the wearer, but surely a "deep" V-neck can't be the pinnacle of creative expression! As a consumer, not just a designer, I find the mediocrity, of most men's knitwear, insulting.

So I often catch myself thinking, " … this just isn't good enough … ", but it's also not really good enough just to rage against the world either, and I then wrestle with what my solution to the situation is, what my answer to it will be.

RP: What’s your favourite piece you’ve made? And what inspired it?

KC-W: How to chose from amongst your children?! I really can't decide, it's pathetic to sit on the fence like this but I think at the moment I am still too close to the collection to see which piece I enjoyed making over another. I'll be able to tell you I a month or so. I love and hate them all in equal proportions!

The inspiration for the collection entitled “BODYBOUND” was the macabre photography of Joel-Peter Witkin and a particular verse by Christina Rossetti:

"We must not look at goblin men,

We must not buy their fruits:

Who knows upon what soil they fed

Together they inform my collection on the human condition, desire and the perverse. Referencing both the anatomical drawings of Vesalius and the eroticism of Hokusai, the collection revolves around skin, sinew, muscle, and bone. It pumps sex back into a craft that has become lust-less, prompting arousal and addiction for men's knitwear by examining the relationship between seduction and repulsion.

RP: Do you think it’s important to preserve knitwear as a craft for future generations?

KC-W: I think it is more important to ask ourselves what kind of craft we would like to pass on to future generations. Will we be increasingly dogmatic in the transmission of our skills so that we are left with a precious oddity, or will we create a culture for those skills to be developed so much so that they are un-recognizably knit? I think that especially in the current global climate, we have to move past feelings of fleeting nostalgia and be brave enough to create a new legacy for a future generation.

RP: Where do you see knitwear’s place in fashion developing in the future?

KC-W: I would very much like to believe that it will become an increasingly integral part of a fashion collection, instead of the novelty, styling piece, that is its current position in most fashion collections. In many big fashion houses knitwear is relegated to the simple and saleable items within a collection. This is such a waste! I think, too, that many fashion houses are held at the mercy of their factories. Part of what we do as knitters is so technical that it is quite hard to “bluff” your way through it if you don’t really know what is truly plausible. Many factories are quite capable of great technical feats in knit construction but simply don’t have the impetus. They, more than knit designers, have more to answer for when it comes to looking at the stagnation in this sector of the industry.

RP: Do you think knitting’s image has changed recently?

KC-W: Very much so, but not enough…

RP: If you didn’t do knitwear, what other part of fashion would you work in?

KC-W: If I had another lifetime, I would very much like to become a tailor. There is something of real integrity within that craft that it shares with knitwear.

RP: How much of your own feelings and personality do you feel come into your work?

KC-W: A lot. It is usual for creatives to poor their whole beings into the things they make, and I think that is no less the case in fashion. The exciting part though is watching a creation become an object in its own right and claim a personality of its own.

RP: Is there any particular artist, designer, or actor that you identify with in terms of your work?

KC-W: I have never used a real person as a muse. Or tried to emulate the persona of a live being in my work. I think that it becomes all a bit too complicated, too much about that person, about what they really do wear and think and behave. It limits us to the here and now, and I think that much of what we should be addressing is to do with creating a better world. If I could indulge in one moment of hypocrisy, I would love to be able to knit garments the way that Francis Bacon paints.

RP: What does fashion mean to you?

KC-W: It’s very much a medium for rallying against mediocrity in the world. The beauty of this industry is that at the end of each concept we have something that exists in the world, that demands to be addressed because of its existence. It allows us to give an answer to questions that are addressed in our environment, that is also accessible to a wide audience.

RP: What methods of knitwear do you use, are you largely a hand knitter? Or a machine knitter? Why do you use the techniques you do?

KC-W: I try not to limit myself to one niche, what we have is already so rarefied. I use hand, machine, and digital forms of knitting, using the nature that those techniques lend, for different effects.

RP: Which is better, knit, crochet, or machine knit?

KC-W: Fight.Fight.Fight … Million-dollar question …I think machine knit is the best! Will I get lynched for that?

RP: Which of these best describes your work, fashion, art, craft, philosophy, performance (you can choose more than one)

KC-W: I like to think that my work remains in the field of fashion, however dramatic it might come across. It’s important to me that my pieces are always meant to be worn. However theatrical, I never create a garment that I don’t want to be worn on the street.

RP: What message would you like to send out to the members of the Guild?

KC-W: It is only possible for young knitwear designers to succeed if there is the provision for them in the form of financial support after they graduate. As a friend of mine eloquently put it “ … money talks, bull s***t walks … ”

This is all terribly dull but frighteningly true. If we genuinely want knitwear to grow and blossom rather than being sidelined as fashion’s poor cousin, we have to create the infrastructure to promote knitters after they are expelled from the safety of our art schools. Only in this way can we endeavour to put to good use all the hours of blood, sweat and tears that goes into a degree, and sustain a thriving knitting community.