What is lace knitting?

At the present time, lace knitting is enjoying a popularity it has not known since Victorian times.

Lace knitting is a derivative craft. It evolved from the desire of the hand knitter and the 18th century framework knitter to emulate as closely as possible the products of hand-made needlepoint and pillow lace. In the process, it evolved into a distinct and fascinating genre of knitting.

Its heyday was the 19th century, when 70-80% of all patterns in knitting publications were concerned with "openwork", "fancy", "eyelet" or "spider" patterns, all of which would come under the banner of lace knitting to a greater or lesser degree. The complementary terms "lace knitting" and "knitted lace" were not generally used until the end of the 19th century.

There are many examples of different types of lace knitting and early pattern books in the Collections of the Knitting & Crochet Guild. The sampler shown here is a fine example although very little is known about its provenance. 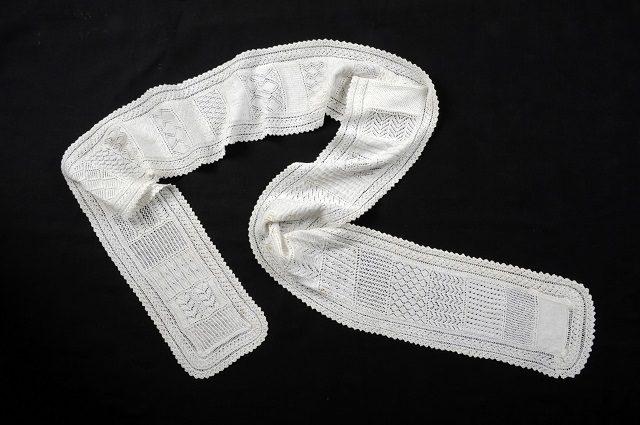 The Guild also has a sampler created in 1891 on which extensive research had been done.

To date, the earliest garment featuring lace faggoting in diagonals, is a mid 16th century pair of silk trouser hose, kept in the Dresden Museum.

From a diagonal to a simple diamond is the next step. A piece of knitting now in the Edinburgh Museum, dated late 17th century and featuring simple lace diamonds, was found in 1951, in the Gunnister burial on Shetland.

We know from Felkin's History of the Machine-Wrought Hosiery and Lace Manufactures (1867), that by 1700,

English framework knitters were hand tooling a variety of frame knitted lace patterns from Spain. The lace attachment ("tickler bar") was not invented until 1764.