Sometimes (as in the example below), the pattern on the punchcard or patterncard visually resembles the stitch pattern you will see when you use it. In other cases, there appears to be little correlation! This is because the punchcard shows the needles to be worked (selected for a particular treatment) but the knitter can what to do with those needles (which may not be simply to knit them). 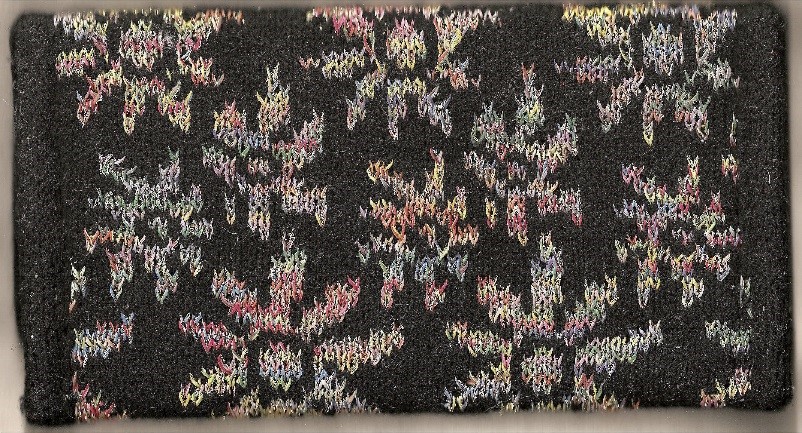 Punchcards were first invented by Joseph Marie Jacquard in 1798 for his weaving looms. They evolved over the years and were adapted for use on the domestic knitting machine.

A punchcard selects the needles to create the pattern (just like the idea with the Jacquard loom used in weaving). The number of stitches controlled by the patterning system has increased over the years, first with standard pattern sizes of 8 and 12 stitches, and then in 1971 to 24 stitches, which became the most popular stitch pattern width for some years.

24-stitch punchcard patterns can be broken down to smaller pattern repeats of 2, 3, 4, 6, 8 and 12 stitches, increasing the design possibilities. The discipline of 24 stitches would seem to be restrictive but in fact if it is looked on as a challenge to the knitter's creativity: the number of patterns that can be created is infinite.

Although most of the punchcards for one model of machine with a 24-stitch repeat can be used on another, this is not true for all of them. Lace cards are always different, as different machines create lace stitches in different ways. And even when one model’s cards can be used on another, the starting position (how far into the machine to wind the card for the first row) may differ too.

The term patterncard has been used here to distinguish the single pattern repeat grids (of the proportional grids on the electronic machines) from a punchcard (which needs sufficient length to be able to wrap around and join if you want to knit continuously in the pattern).

In the 1980s, electronic knitting machines were introduced. Initially, the patterning system used Mylar sheets with a 60-stitch wide pattern facility. The patterns were marked on the sheets with a special pen in proportional grids. It was not necessary to fill in the complete sheet. One pattern repeat was all that was needed to knit the pattern, and the machine could be programmed to knit the pattern across the width of the needlebed, if required. A pattern repeat could be any width the knitter wanted within the 60-stitch maximum discipline. However, using the variation keys to double the width and length of a pattern, or using the negative key, it was possible to control the whole of the 200 stitches on the needlebed.

In the 1990s, models were introduced that had 555 built in patterns. Mylar sheets were discontinued. The ability to control the whole needlebed created many more design possibilities. It became possible to pick out any section of a patterncard and use it as a repeat pattern. As with a punchcard, not all the designs shown on a patterncard will produce a recognisable design unless the knitter has the knowledge and understanding to control the machine.