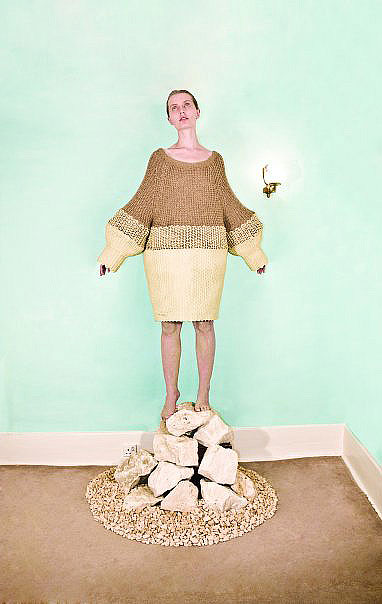 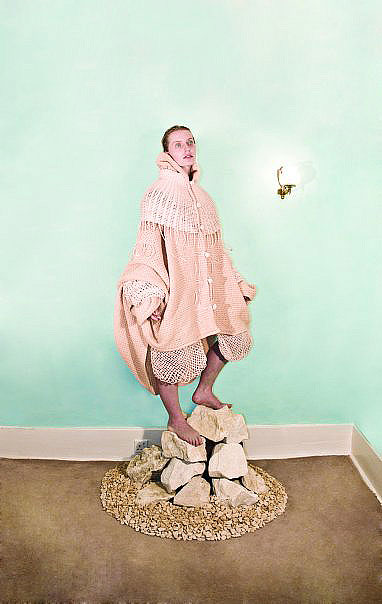 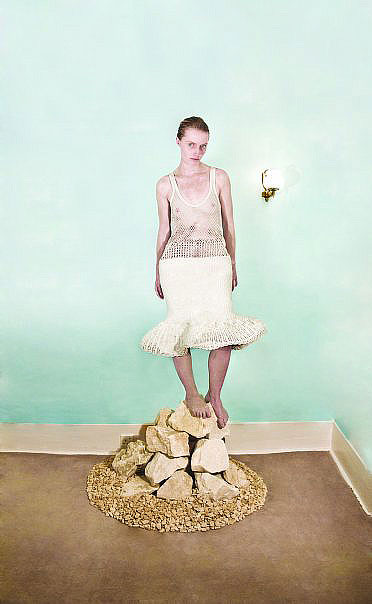 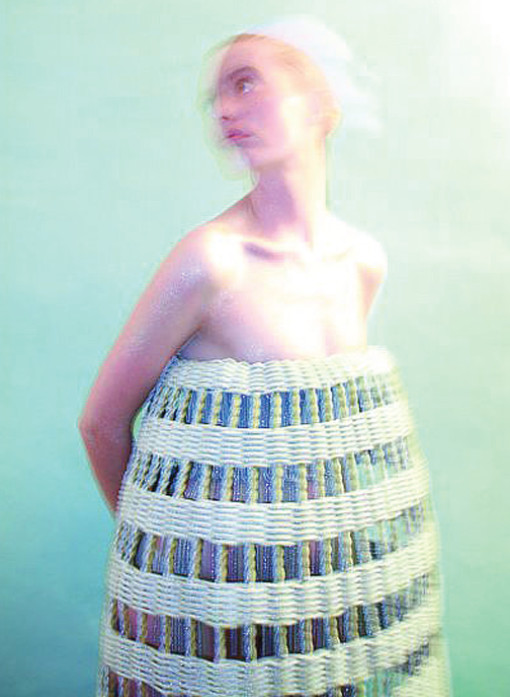 RP: Where did you study, and why did you choose to study there?

LB: I've been building my spacecraft at Central St. Martins. I suppose I applied to the foundation course at CSM because of its reputation not because of careful consideration. Once I was in and playing, luckily it felt like the right kind of context within which to unfold myself and my ideas so continued along its spacious pathways.

RP: What made you decide to work in knitwear? How do you think it's different from other parts of fashion?

LB: Knitwear held promise of more liberty and access to a great reservoir of untapped possibilities. Knitted textiles are much, much younger than woven ones in a timeline sense, so there are millennia of work to be done. It doesn't make sense to me to view knitting in a nostalgic or secondary way, it is pioneer territory. I don't see knitwear as so different to any other parts of fashion. Perhaps it is easier for people with no skill to find a rock to hide under in other areas of fashion. There is no room for airheads in knit.

RP: What's your favorite piece you've made? And what inspired it?

LB: The piece from the collection that was most satisfying to make was the glittery silver basket dress. The way it developed was quite haphazard but it came together at the end like Cinderella's ball gown. All of us that were working on it were like the birds and mice; it was a meeting of minds, beaks and paws. The structure of the dress became like a vortex, a closed circuit which encircles the body, creating extra electricity. That reminds me of something which I believe sets knitwear apart: the opportunity to make garments that have a fully-integrated quality, a seamlessness which makes them powerful in a way that garments with obvious joins will never be. Knitted, or crocheted garments at their best are like cyphers made by angelic spiders.

RP: Do you think it is important to preserve knitwear as a craft for future generations?

LB: This isn't something that I worry about. I feel like things are more cyclical than linear, with the past, present and future being rather mushy and pretty redundant concepts. This is constantly apparent to me in the context of craft and technology. I don't believe that anything can become lost so I'm not sure how important conscious efforts to preserve are. If for some reason knit ceased to be present in our current reality in a physical sense, its memory would remain somewhere in the mainframe.

RP: If you didn't do knitwear, what other part of fashion would you work in?

LB: Knitwear isn't a gateway drug: I wouldn't be in fashion. Ending up doing this kind of thing has been a series of fortunate and timely events, not to say I haven't worked my little heart out.

RP: How much of your own feelings and personality do you feel come into your work?

LB: I swing between feeling that this work is an honest reflection of where I'm at or that this work is pure aspiration and desire to be something, someone, or somewhere else. In the shake down, I reckon that both functions are revealing. When I look back over my work it seems that I have played out my fears through it, as if it were a virtual, alternate reality. In A-level art I was making work about being fat because I was fat and unhappy about it, in Foundation I got naked and was concerned with genitalia.. In the past year I have been fearful of psychosis, and that was part of the genesis of this collection. A couple of years ago, I made a kind of bra for men in a sportswear project because I was hung up about my man boobs. I'm not so down about it now. Having made that piece, I feel quite stable and supported.

RP: When you design your work do you think about how knitwear limits it? Or do you design first then find ways to use knitwear in a new way to achieve your aims?

LB: I'm not thinking about the limits of knit when I make something because that would mean forcing something into being that can't be born without hideous and painful effort. I seem to start with a particular technique or family of techniques and then build from there, incorporating more intangible things such as mood as the thing develops. I find it quite surprising how many of my peers seem to try and build their houses from the roof down, as it were. Designing something without a sensitivity to technique and then forcibly inserting knit, or anything else, into it is a certain recipe for ugliness.

RP: Is there any particular artist, designer, or actor that you identify with in terms of your work?

LB: I identify with artists of any order who consider themselves to be conduits for ideas and visions rather than the owners of them, like human lightning rods. One who has been important to me for a while and especially recently is Kate Bush. A designer and artist who has been important to me is Zayne Armstrong, a contemporary of mine. He helped make my graduate collection physically but moreover is someone that I can discuss things with in a way that feels full of wonderment and unknowableness but also meaty and practical. He's a good egg.

RP: What does fashion mean to you?

LB: Fashion for me is above all else a spiritual matter. The fashion business seems to me about the buying and selling of modes and means of self-expression. I think it is fantastic that we can extend ourselves into garments and encode them with ideas, beliefs and desires. The talismanic properties of clothing are not discussed enough. Clothing and different combinations of clothing enhance people's powers and can create the right conditions for unexplainable, magical things to happen. It seems to me that the most significant fashion trends happen when there is a discernible spiritual unity between a large enough group of people for a time. Whether or not they know it, fashion designers are magicians and alchemists, which is why their work costs significant amounts of money. It appears to me that the higher up the fashion tree, the more powerful a garment tends to be in terms of all its different properties. Ridiculously cheap, mass manufactured clothes are less desirable partly I believe because they have a tendency to be spiritually defunct and impotent. They have not been imbued with significant energy and the circumstances of their manufacture and retail are totally limiting to their potential as storers of energy and ideas. D.I.Y. clothes made at home, on the other hand, are some of the most potent garments around.

RP: Does this come across in your work, if so how?

LB: Colours, shapes, textures and style are for me a kind of code that can be written or programmed to have certain effects. My work so far has grown out of certain thoughts and feelings that I am or have been experiencing. These become channeled into the garments and dictate design decisions. It is a task to keep that connection between feeling and aesthetics, so that the garment becomes encoded in a unified way. On presenting work to people, I trust that empathy will occur and people will connect with it, feel it, and project onto it.

RP: What methods of knitwear do you use, are you largely a hand knitter? Or a machine knitter? Why do you use the techniques you do?

LB: I am for combining differing structures, so I'll play with any technique to achieve a certain something. This has so far included hand knitting, crochet, machine knitting, knot work, basket weaving, hand painting, cross stitch, foam moulding, resin moulding and flocking. I find myself particularly concerned with the joins between the different materials that make up my knitwear chimeras. I aim for them to look like like magical transformations manufactured by telekinesis. It requires interdisciplinary experimentation to make that happen.

RP: Which is better, knit, crochet, or machine knit?

LB: They each have wonderful properties which I make use of. I find crochet particularly handy because it enables me to latch yarn onto unexpected materials or objects and integrate them into a piece.

RP: Which of these best describes your work: fashion, art, craft, philosophy, performance (you can choose more than one).

LB: I feel like fashion, art and craft are the most relevant to my work. I have philosophical debates about my work internally, but am not yet sure how much of that I'd like to involve in the presentation of my work. Performance is something I think about and part of me wants to be a showman. I found that folks being around when we were making the pieces at college and discussing them added extra energy to the proceedings and this trickled down into the garments. I would like to propagate these kind of interactions around my work or the work of a group. I've thought about how exciting it could be to make a collection in strange surroundings, like a model Celtic village or something.

RP: What message would you like to send out to the members of the Guild?

LB: I'd like to say: keep on keeping on! My work involves crafts that thousands of people do for the most beautiful and hopeful of reasons; joy, comfort, self-expression, learning, historical recreation, healing and giving. It is part of the struggle of my work to negotiate these good craft forces in the present fashion climate. The fashion industry involves factors which are the enemy of well-intentioned craftsmanship. It is reassuring that this Guild exists and that its members are doing their thing freely. If this world was Middle Earth, the Guild would be located in the Shire and the fashion industry with its clone armies would be located somewhere near Mordor. I feel like a hobbit.