In 1987 Richard Rutt wrote his definitive book "A History of Hand Knitting", published by BT Batsford Ltd ISBN 0 7134 5118 1. This is a brief summary of his research and the conclusions he came to.

When and where did hand knitting start?
Richard Rutt formed the view that hand knitting was not invented at one time and place. Crochet and Tunisian crochet are known to be of a later date and so are not the origin of hand knitting. Sprang, netting and nalbinding have also been confused with knitting but these techniques are different. However since nalbinding is older than knitting and both were used to make footwear in the same region it is possible that knitting developed from nalbinding, probably in Roman Egypt.

He was also cautious about making claims and assumptions because many examples are fragments and, while the location where they were found is known, this does not mean that the knitting was made in that place. In many cases there is no comparable record for the fragment. Where historical documents do exist they may have been written at a time when the use of words and language was not standardised and the vocabulary to describe "knitting" was not developed. However the earliest datable pieces of knitting are: 13th century Spanish cushions and Egyptian mediaeval fragments.

Origins of purling and knitting in the round
Richard Rutt said that surviving artefacts suggest that tubular stocking stitch was the first form of knitting and that the purl stitch was a late invention. The earliest datable purl stitches are on the stockings of Eleonora of Toledo, 1562 or earlier. It is likely that purling had been used in turning the heels of stockings before this but there is no clear evidence. From the mid-16th century onwards the purl was used as a decorative stitch. 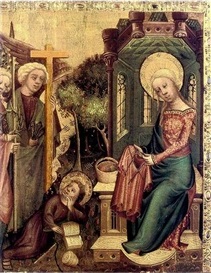 Visit of the Angels by Master Bertram of Minden

Surviving Mediaeval and early knitting is nearly all done in the round but the number of needles used is not clear. Several Late Mediaeval paintings of the Madonna knitting show her with work on four needles, but four or five needles were used. An English stocking pattern from 1655 gave instructions for stockings to be worked on four needles. Knitting on two needles may first have been developed for turning heels of stockings. Three-dimensional shaping of round knitting was done by cap-knitters in the 16th century who were part of a well-established guild industry.

When was flat knitting on two needles first done?
Some mediaeval Egyptian knitting was flat but in Europe flat knitting was probably influenced by framework knitting. It is likely that knitters were imitating clothes tailored in cloth. There are examples of fine jackets imitating brocade probably from the 17th century. By the 19th century flat knitting was commonplace and garments were seamed. Shaping was crude. Careful shaping of knitted pieces for tailored garments was not perfected until the 1930s when individual designers became skilled in developing elegant and practical shapings.

Our Patron Lorna Hamilton-Brown's Masters dissertation tells several historical stories of black knitters in Africa, America, the UK and Jamaica to debunk the myth that "Black People Don't Knit". It also reveals the bias in the way that knitting histories have been previously told. You can read it here.

If you are interested in knitting history, the Knitting History Forum is a useful resource to explore.